Hello one and all.

I love to make shadow boxes and that immediately came to mind when I saw the inspiration photo. 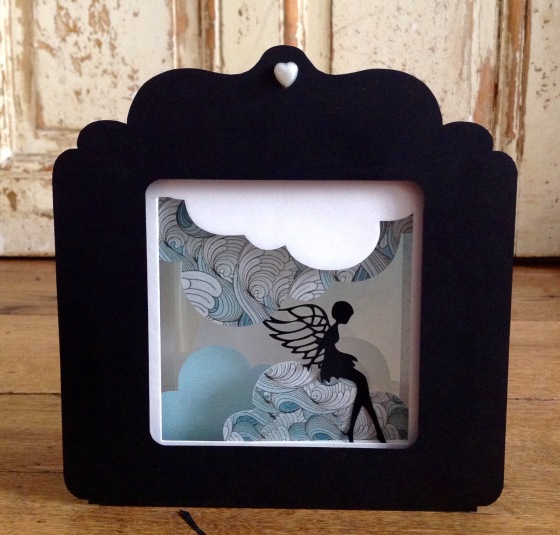 I used a small Ribba frame from IKEA as the base , the clouds were cut with my Cameo using vellum,acetate and card, some were coloured with Pan Pastels and some were printed. The angel and the outer black frame were also cut with my Cameo. I didn’t like the shape of the frame so made my own and adhered it to the front this part actually took me longer than making the rest of the inserts !

This is what it looks light lit from behind I have it on a shelf in my craft room lit with a strip light also from IKEA.

I made a mask with some of the leftover clouds from the shadow box and used Pan Pastels to make the clouds both blue and pink, yes I have pink clouds where I live. The robot is Hero arts with a touch of glossy accents the sentiment stitched border and rocket are all from my darling Cameo.

I see that CASolgy has another great theme for this week

So I’m entering my shadow box

Wishing you all a fabulous day